Ulysses S. Grant was born in 1822. He was the son of an Ohio tanner and was originally named Hiram Ulysses Grant. Ulysses and Julia Dent were married on August 22, 1848, in the Dent's townhouse in St. Louis, Missouri. He went to West Point rather against his will and graduated in the middle of his class.

In the Mexican War he fought under General Zachary Taylor. At the outbreak of the Civil War, Grant was working in his father's leather store in Galena, Illinois. He was appointed by the governor to command an unruly volunteer regiment. Grant whipped it into shape and by September or 1861 he had risen to the rank of brigadier general of volunteers. 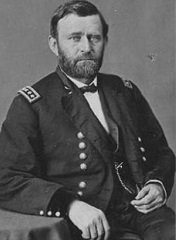