The realization for the need of fire protection in the city of Petersburg, VA dates back to the time when Petersburg was very first established.  The colonial town was established by law in 1748.  People made use of fire and under the right conditions it was very good to them, but when something happened and the fire got out of control it destroyed everything in its path.  When this happened there was a need for a certain amount of manpower to try and stop the raging fire.  Thus a fire company was organized.

The men that made up these companies were members of the town.  They volunteered their services so they were not of a paid organization; they were what we call today volunteers.  The first evidence of a volunteer fire company in Petersburg was in 1773 though the tragedy of fire struck much earlier.  This is evident because in 1748, the same year that Petersburg became a town by law, there was a law passed that forbid wooden chimneys to be used.  Those that still existed were either to be pulled down by the owner or by the sheriff.

The Old Street Fire Company was established in 1788 and is regarded as the oldest establishment of its kind in Petersburg.  There was another fire company organized in 1793.  It was called the Bollingbrook Fire Company.  In 1854, the Old Street Mutual Aid Fire Association was formed.  It consisted of four volunteer companies, the South Ward company, the Old Street Company, the Bollingbrook Company and the Virginia Company.  There were approximately 150 men.  These companies continued thru the War Between the States and reorganized in 1866.

When the department was reorganized, there were still four companies.  These were all volunteer companies except the chief who was paid $50.00 every three months.

In the 1800’s the members of the fire department were elected to their position.  The key factor in deciding if they were elected was the political party in control.  When a political party lost their control, new members were elected.  Also, the name of a fire company was often changed when a new officer was elected.

There was a parade held for the occasion of the new truck and the fifty-seven members of the Cockade Hook and Ladder Company were there.  Their uniform consisted of grey caps, grey shirt and black suit.

On September 1, 1869 the city appropriated $2,145.00 for a lost and to build a house (fire station) for the Old Street Fire Company on Old Street.  They also appropriated $200.00 for a new bell for the company.  The bell weighed approximately 400 pounds.

On June 27, 1870 the South Ward Protection Company changed its name to the Stonewall Fire Company.  On the first of July of the same year the city got their first assistant chief, R. A. Orr.

Both the Johnson Hose Company and the Stonewall Fire Company dissolved on July 1, 1871.  This was due to the fact that they refused to serve under the newly appointed chief, William P. Lacy.

This did not last long though because sometime between the third and the fifth of that same month a group of Negroes tried to organize a colored fire company.  In order to prevent this from happening, the members of the old, dissolved companies were called together for a meeting and decided to reorganize.  On July 7, 1871 the Stonewall Fire Company was organized once again, thus eliminating the black fire company.

The ending of the year 1875 paved the road towards a paid fire department in the city of Petersburg.  On December 7, 1875 the all-volunteer fire companies were dissolved.  This made way for the part paid and the part call men theory.  This was initiated on December 14, 1875. 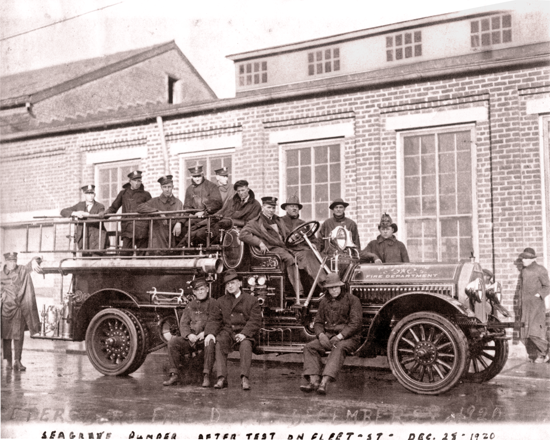 This lasted for approximately three and one half years.  On August 1, 1879 the fire department was reorganized and cut to two companies with a total of twenty-three men.  Company #1 was located on Halifax and Harrison Streets and Company #2 was located on Short Market Street near Old Street.

R. F. Jarvis was elected as chief of the department.  The men of the other companies were as follows:

Company #2 was later moved to West Bank Street near Bartow Alley.  This was possibly done because of a fire which destroyed the station at Short Market Street.

An additional company was added to the city in 1901.  Company #3 was located on South Street near High Street.  Southern Hardware occupied the old South Street Station until 2011 when it closed.

In November of 1945 another station was added to the expanding city.  It was not occupied until September 1, 1946.  This was called Company #4 and is located in the Walnut Hill area of the city on South Sycamore Street.  In 1952 the station on Bank Street moved to Fourth Street.  This was to be the Headquarters Company and was changed from Company #2 to Company #1.  The Halifax Street station was then Company #2.

In 1955 the South Street station moved to where it is located today, on Farmer Street.  This is in the west end portion of the city.

In 1965 the Halifax Street station moved to Market Street.  This station is in the main portion of the old city.  This company is still located on Market Street.

In the later part of 1973 a new station was added to the still expanding city.  Company #5 was built on Johnson Road near Birdsong Road and was designated as Headquarters Company.  The company at Fourth Street was combined with the one on Market Street to form Companies #1 and #2 at Market Street.

The latest addition in the way of stations is Company #6.  This is located on Wagner Road near Route 460.  It was completed in January of 1977.  In the early part of the 1980’s, because of the economic climate of the time, this station was closed and the personnel redistributed to the other companies.  In 2002, the station was reclaimed by the department and renovated into our current Fire Training Center on what is now Fort Bross Dr.